How We Discovered 1TB Bug While Testing Interoperability 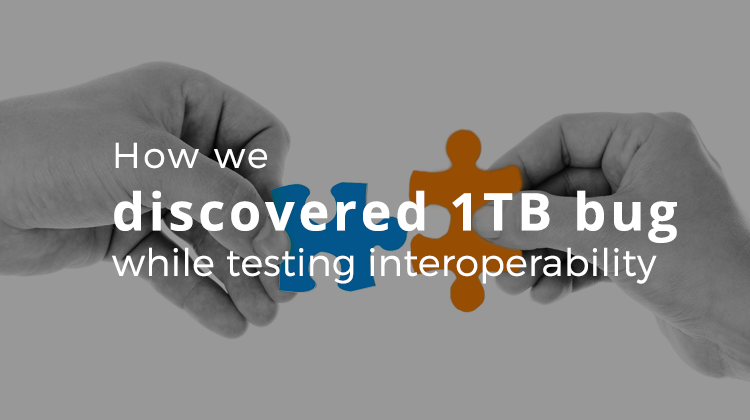 Interoperability Testing and Its purpose

Interoperability testing means testing the software to check if it can inter-operate with other software components, software’s or systems.

Now let’s see, how we discovered this bug.

The customer is a leader in computer storage and data management, dealing in various storage products. The product is a purpose built storage appliance, optimized for data protection and archiving, that seamlessly integrates cloud storage into the infrastructure to deliver instant recovery, end to end security, and the industry’s most cost-effective storage for backup and archive data.

How did we discover the issue?

The typical test case execution was done with data size ~250GB for a new Cloud Provider qualification. This was based on few inputs like most frequently used data set size, time required for execution etc. But this did not test the limit of the product. In order to further explore the product limit based on some customer centric use cases, we tried to run the test with a large data size ~1TB. In customer use case, the data size could go well beyond 1TB. When we triggered a backup of the 1TB data size, we hit the issue.

Test Steps were followed as:

Expected Outcome: – 1TB backup successfully completed and all the data replicated to the cloud.

Debugging and Root Cause of the failure

The initial failure was with an error “media write error (84)”. It was quickly identified as the issue with the local cache and hence quick work around was to increase cache size to 1 TB. The intent was to debug further to get to the root cause.

Upon further investigation of the system logs and wireshark traces with help from the development team, it was found that the service on the appliance stopped working due to the backend code in appliance that only supports 16K buffer to receive the JSON response. In this case, the response was greater than 16K in size and got truncated, resulting in an incomplete JSON buffer. The issue was finally fixed by adding support for buffer with size greater than 16K.

That’s all from us about Interoperability Testing. Subscribe to our blog for more actionable content which will be sent straight to your inbox.