HomeBlogsAWS vs Azure vs Google Cloud: The Comparison Guide

AWS vs Azure vs Google Cloud: The Comparison Guide 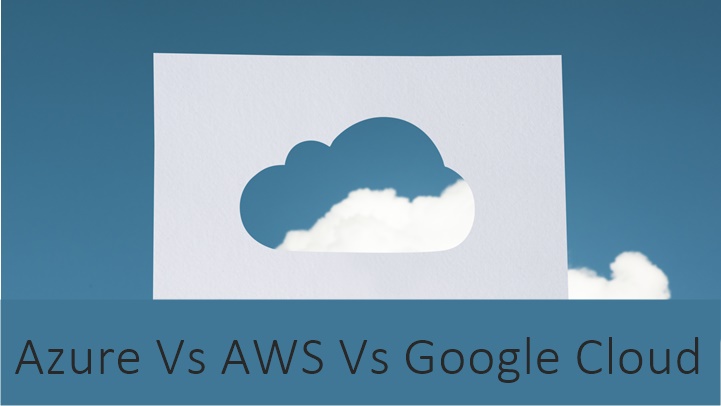 Microsoft Azure, Amazon Web Services (AWS), and Google Compute Engine or Google Cloud – these are the three main public Cloud vendors in the Cloud Infrastructure Services, also known as IaaS (Infrastructure as a Service) market. IaaS platforms virtualize datacenter infrastructure like compute, storage and networking and can be bought by the customers based on their consumption. IaaS providers manage the networking, storage, virtualization, servers, and hard drives as well as provide other services like message brokers and databases.
Here’s a brief comparison of AWS, Azure, and Google Cloud

AWS vs Azure vs Google Cloud

Amazon Web Services (AWS) pioneered IaaS in 2006. Being the leader in innovation, AWS is the most preferred choice for customers migrating to IaaS. AWS has more than 2000 consulting partners for managed and professional services. On the other hand, AWS implementation requires deep technical expertise. As its pricing structure is complex, using third party cost management tools is recommended. Very few AWS services are covered by an SLA.

With the launch of Azure VMs in 2012, Microsoft; which previously was strictly PaaS, diversified into IaaS. Azure is bundled with other Microsoft products and services too. It also offers hybrid cloud computing for hyperconverged infrastructure.

Azure offers 99.99% availability SLA for block storage and 500TB per account limit for object size. It supports Windows as well as Linux VMs. Azure too has its own IoT platform.

With the launch of Google Compute Engine in 2012, Google entered IaaS space; although it had an aPaaS offering since 2008.

Google offers 99.95% availability for block storage and 5TB object size limit. The pricing model is based on sustained usage with lesser per unit cost as the usage increases.

Customers usually prefer having a multi-cloud strategy, using public and private clouds together. Azure has 34% of the market share of running applications on Cloud, while AWS and Google have 57% and 15% respectively. Other vendors like IBM Bluemix, Oracle, and Alibaba also have a sizable footprint in the IaaS space. Depending on the requirements of specific use cases, the customers can choose which Cloud IaaS vendor suits their needs.

We use cookies to ensure that we give you the best experience on our website. If you continue to use this site we will assume that you are happy with it.YesNoPrivacy policy
You can revoke your consent any time using the Revoke consent button.Revoke consent