Tricentis Tosca is a software testing tool which is used to automate end-to-end testing for software applications. Developed by Tricentis, it supports a wide range of technologies ranging from API and UI to Web and Mobile.

In this blog, we will focus on TOSCA and its compatibility with SAP Applications.

We had one such situation where we wanted to automate S&D (sales and distribution) module in SAP application, we started to analyze and look for different open source options to achieve this. But, we faced different problems with different tools:

Sikuli: We tried automating with Sikuli, we were able to automate simple tests, but as this is an image-based approach it wasn’t much reliable in complex test cases.

When the open source option was not a good solution for the problem, we turned to paid software.

There are multiple paid tools in the market to automate SAP application, let’s have a look at the comparison of few leading tools:

Comparative analysis of TOSCA for automation over other tools like HPE QTP/UFT and Worksoft:

Tricentis TOSCA proved to be a perfect solution. It helps in automating business flows and accelerate continuous delivery, let’s have a look at its architecture diagram. 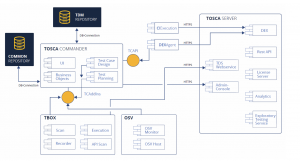 For all supported applications, TOSCA stores the elements and their identifiers in the form of modules in the Modules section, this section plays the role of object repository. These modules are further extended to be used in test case section to create an automated test.

TOSCA provides a separate inbuilt package (Standard modules) for automating SAP applications, these standard modules are generic modules specially designed to interact and perform operations on SAP application. Usage of these modules is extremely simple, they can be used using a simple method such as “drag and drop” to create automated workflow quickly. Unlike programming, the user need not take any extra efforts to perform an operation in SAP, thus TOSCA saves automation time and users can focus on accelerating delivery.

TOSCA has its own Test data management which is under TestCaseDesign section, we can use a single test case for multiple sets of data using TestCaseDesign. Executions are maintained in the Execution section; historical results can be saved for every execution.

Conclusion: TOSCA is the best compatible tool for automating SAP applications, as it speeds up delivery and reduces automation efforts and helps achieve continuous testing process.


Software testing Test Automation
Author: Ankit Dwivedi
Digital Marketer by profession and an esports enthusiast. I love to read and try new things. If you don't find me doing any of those, I'm probably binge-watching. Let's connect on LinkedIn.