“The same useless team bonding game. No, not again!” This statement we usually hear when there’s any such game being organized. So, when this thought crosses your employees’ minds, throw the benefits of team bonding games out the window. It’s high time to make your team bonding games not only educational but also enjoyable.

They are meant to be enjoyable, allow team mates to better understand each other. Think, solve and come out with a solution for any problem.

So, amalgamate enjoyment with learning while strategizing team bonding activities to avoid chorus groans from your employees. Let’s have a look at 3 team bonding games which your team will want to play again and again.

One or multiple small groups can play this game with random objects. This is a great team building game where a unique object is provided to each group. One member at a time has go in front and demonstrate the usage of that object without speaking. Rest of the team must identify what the player is demonstrating. We AFourians regularly organize this game to inspire creativity and individual innovation among the employees.

Blind Drawing is one of the most interesting games which can be played with two or more people. Simple objects like a pen, paper and a picture are required. Rules are equally simple where you need to divide everyone into groups of two with its group mates sitting back to back. Give one person the pen and paper and the other person the picture. The person with the picture describes the picture to their corresponding teammate without saying what it is. Then the person with pen and paper draws the picture based on the verbal description. But a time limit must be set based on the complexity of pictures given.

Once the task is finished its always interesting to see partner’s describing and drawer’s interpretation skills which comes out with an interesting end picture. After organizing this game for ‘n’ number of times I must say AFourians have some of the best interpretation and communication skills.

This game’s objective is mainly team bonding and ice breaking. It needs preferably a Jenga set with large blocks or the game can slightly be tweaked by using inflated balloons.

This game always turns out to be a team building ice breaker for work and allows people or team mates to test their limits.

Write a fun dare like 10 pushups, sing a lullaby, dance like a joker etc. on each block. When each of the block have dares written on them stack them to a Jenga. When people pull out a block, they must perform the task written on it.

Or else if its tweaked with the use of balloons then write the tasks on paper chits and shuffle them. Divide everyone into small groups and instruclt them to build balloon towers, the number of the times the tower falls while building, one of the team mate must perform one task from the chit. At end of the game the most stable and tallest tower wins. 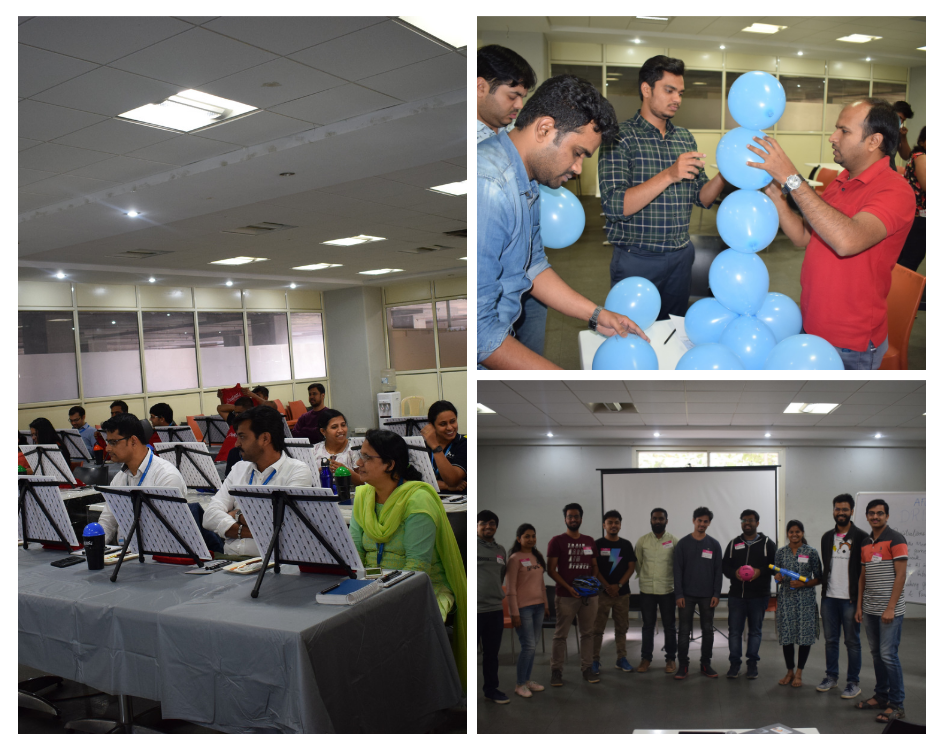 Team work is always more effective, more productive and more successful. A team that works well together is more happier and fun to work with. But we all know team bonding is a tricky task and tend to induce more eye rolls than high fives.

Whether it’s all about putting together some team building initiatives or if your team just needs to get together and do something fun. Workplace team building activities evolving at a faster pace and are the way to go. It’s not all about learning, it can be fun too!

Everything from small team building activities to problem solving exercises, we at AFour Technologies make our workplace a place to laugh, learn, and connect with your each other.